What should the Bucs do about Jameis Winston? 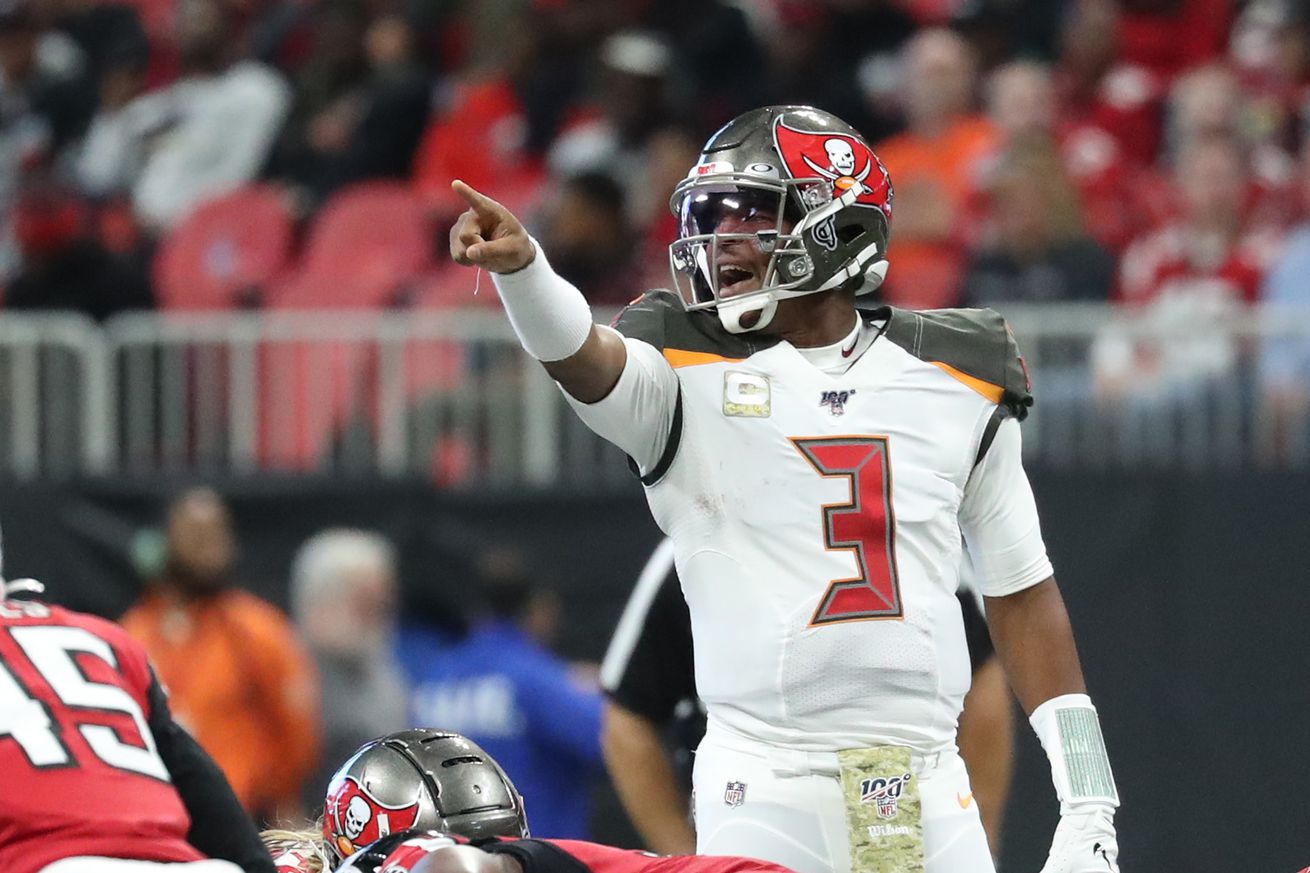 Winston leads the NFL in passing, but he still turns the ball over WAY too much. That leaves the Bucs with a big decision to make about their free-agent-to-be quarterback.

The teams in the middle don’t have a clear future at quarterback. They either have aging quarterbacks, injured quarterbacks, or veterans who just aren’t good enough. The most common version of a “middle” team is one with a quarterback at the end of a rookie deal that it’s not convinced is “the guy”.

One such team in that category is the Tampa Bay Buccaneers.

Jameis Winston is a good QB — with one GLARING flaw

Tampa Bay selected Jameis Winston with the first pick in the 2015 draft, and his career has been filled with turnovers. Many turnovers. Through his first four seasons, Winston played in a total of 56 games (started 54) and threw 58 interceptions and fumbled 38 times! That’s by far the most of any quarterback during that time period. It got so bad last season that he was benched more than once for backup Ryan Fitzpatrick.

But, when you dig just a tad deeper, you can see it wasn’t all bad. Winston had a positive expected points added (EPA) number for those four seasons, ranking between 10 and 14 in each year among quarterbacks. That, plus his natural ability, made it easy for new coach Bruce Arians to stick with Winston for this season to see where this could end up.

Winston’s talent is a perfect fit for Arians’ high-flying offense. Combine Winston’s arm strength, Arians’ downfield passing attack, and the receiver duo of Mike Evans and Chris Godwin, and you have a high-powered attack on paper. And if you look at this passing attack on paper still, it’s been rolling.

Winston has started every game for the Bucs this season. He’s leading the NFL in passing yards and has 30 touchdown passes. That’s good. But … TURNOVERS! Again. For the fifth season in a row, Winston can’t stop turning the ball over. He’s sitting at 24 interceptions through 14 games. He needs six more in the final two weeks to be the first QB in NFL history with 30 touchdowns and 30 interceptions. He’s also put the ball on the ground 12 times, with five of those fumbles being lost. That’s 29 times this season he’s turned the ball over. That’s not good. It’s hard to win that way.

However, and this is important, not all interceptions are created equal. Throwing interceptions themselves aren’t a concern — you’re going to turn the ball over when you throw so much, especially downfield. The issue with Winston is he keeps making the same mistake, as we can see here with Cover 3 dropping linebackers:

I looked at Jameis Winston’s 20 INTs this year and noticed some common threads…Eight involved Cover-3. (Yes, the Titans one looks two-deep, but the safety drops back). Green is the intended receiver’s route. pic.twitter.com/c2CE2PdtY7

That’s not an issue you expect a fifth-year quarterback to have. That said, Winston’s 2019 season does give some hope for the future.

Winston is seventh in the NFL at completing passes that lead to a first down. Winston is 13th in EPA, which actually puts him ahead of Aaron Rodgers.

QB stats after yesterday. Does not include MNF obviously pic.twitter.com/W516mqPfP9

Looking at all his advanced stats, he’s generally the same guy this season, just more turnovers.

So the question becomes: What do the Bucs do with Winston after this season?

If Tampa Bay lets Winston walk, who are the options to fill that job? Do the Bucs go with a first-round rookie quarterback? There are only three of them who could possibly start now and those three — Joe Burrow, Tua Tagovailoa, and Justin Herbert — will be gone by the time the Bucs pick.

Does Tampa Bay push for Teddy Bridgewater, who will be the No. 1 target for any team looking for a veteran quarterback in free agency? Do they attempt to draft a quarterback, sign a veteran, and stay stuck in the middle?

That’s too many question marks, when the answer is sign Jameis Winston. The Bucs need to sign Winston to a short-term deal, but something that satisfies both parties. Winston gets guaranteed money, most likely two seasons, and the Bucs aren’t tied to him for the long haul. And the main reason I’d sign him is Bruce Arians.

Arians is a quarterback whisperer. Outside of Andy Reid, no one has been better at developing quarterbacks in the last 20 seasons. And we are seeing the development happen this season. Winston will finish with nearly 40 touchdowns and 5,000 yards. Yes, the turnovers are bad and yes, Arians needs to hope that in a second season in this offense Winston reduces his mistakes. Is it naïve to believe this will happen? Of course. In year 5, you are who you are.

But the Bucs don’t have a better option, in my opinion. Winston is arguably just as good as the free agent options and the draft isn’t loaded with sure quarterback picks. I need to believe that Arians can work his magic on Winston. The best case, Winston drops his interceptions by 10 next season. What if Winston throws for 5,000 yards, 40 touchdowns, and 15 interceptions? Are you not taking that if you’re Tampa? I am.

That’s why I think the Bucs need to re-sign Winston.

Becoming Financially Stable: The Simple Steps to Get Started With Today