I wasn’t expecting to be laughing on the Boston Freedom Trail tour, which was recommended to us as one of the best things to do in Boston.

I knew it would be inspiring and informative as you follow and learn so many monumental and historical events that helped America gain its Independence from Great Britain.

But, I wasn’t expecting humor.

Our guide, Isiah Thomas, (played by Rob Crean) was dressed in 18th-century clothes – stockings, cloak, three-cornered hat – and was hilarious. 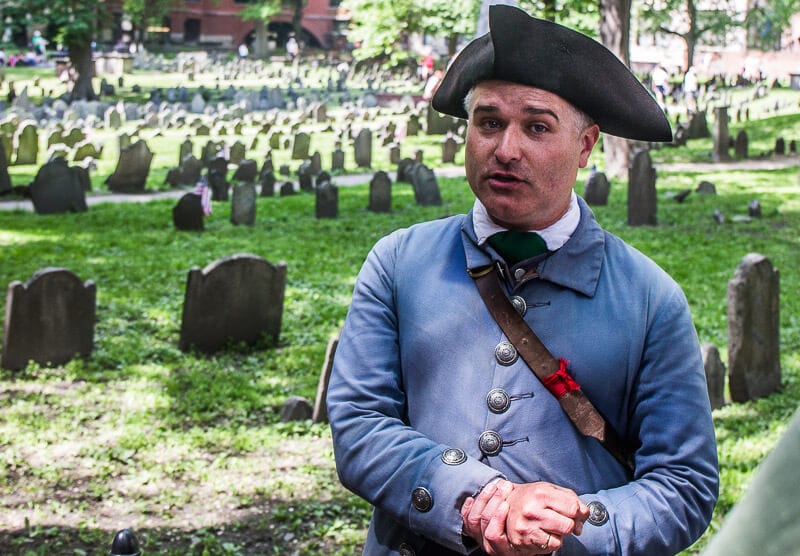 He had the kind of dry sense of humor that us Australians relate so well to. I’m pretty sure that my Dad was the person laughing the most on the tour.

Even when it wasn’t out loud, I could tell he was laughing so hard on the inside at Isiah’s off handed comments that said so much.

The stories he told were quite serious but it’s all about the delivery. He delivered with such entertainment that we were all disappointed when it ended.

The stories seemed that crazy and were so funny, I wasn’t sure if he was just making them all up. One thing is for sure, I learned a lot about Boston, the Revolutionary War and all its heroes and villains on this tour. 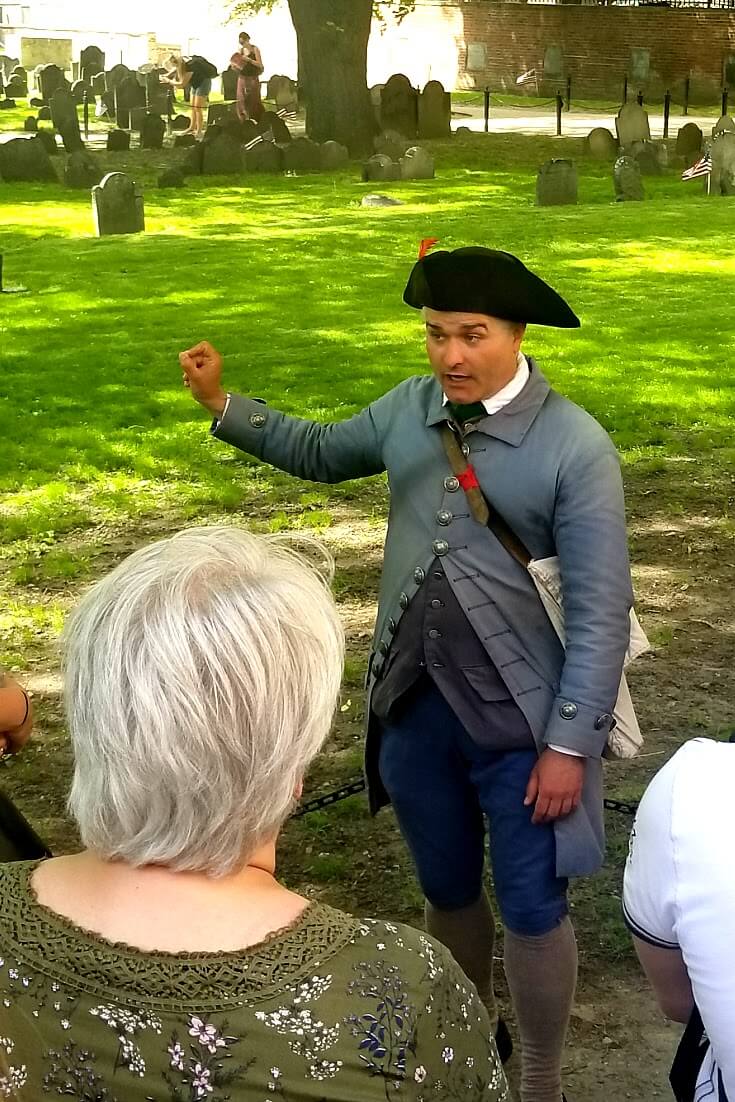 How can you forget stories that are delivered in such a fun way.

Be prepared to learn the truth about Paul Revere, the hero who rode for miles and miles to let the Americans know the British were coming and to save them from their eventual arrest, which would have been for treason and would have ended the patriots attempts to overthrow British rule.

What a different story that would have made? 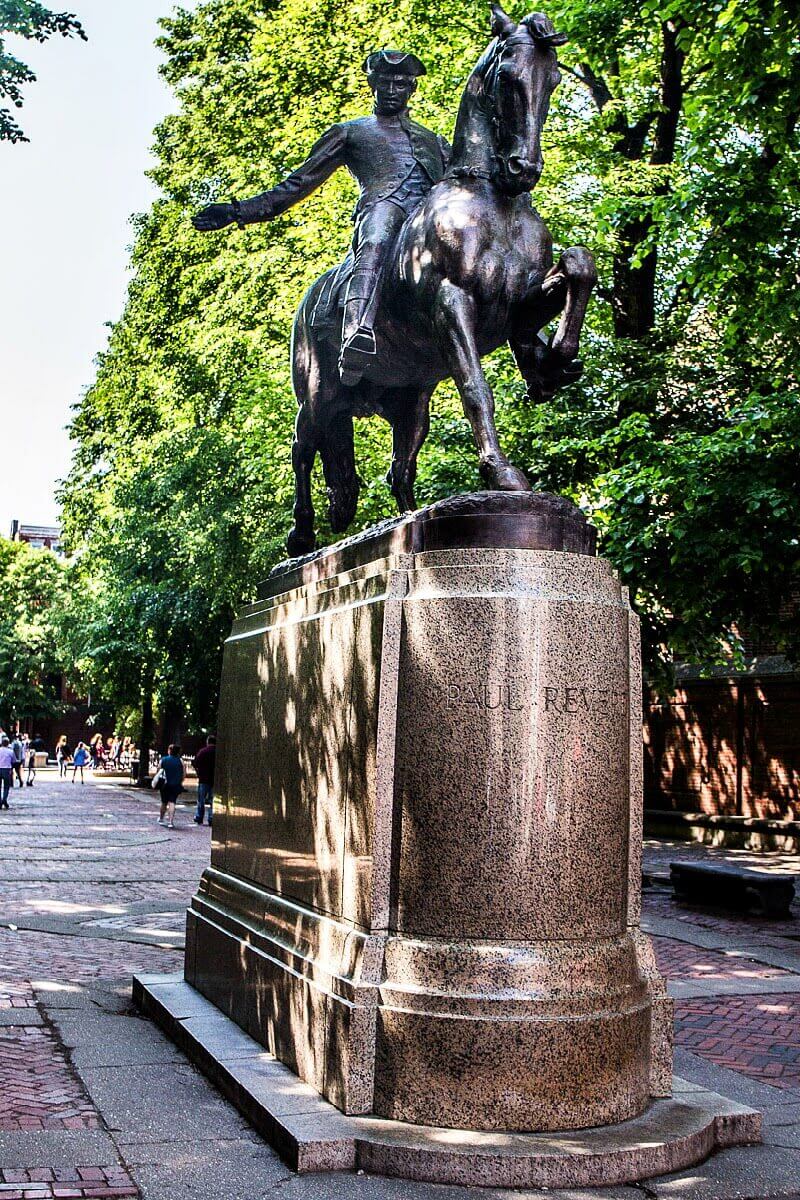 All of that happened in Boston, one of America’s most historical and oldest cities.

Well the Paul Revere story, as most children learn through the poem written by Henry Longfellow, is incorrect.

Many parts of the story were changed for poetry’s sake – you know to make a line rhyme better!

I was shocked as I remember my students learning this story through the poem as well. We’ve all been lied to. Someone had to be made the hero and Longfellow’s abridged story fit the poem better.

The telling of the true story was hilarious and brought the calamity of the truth to light.

But, let’s still honor Paul Revere as he did play a part in helping America become America. 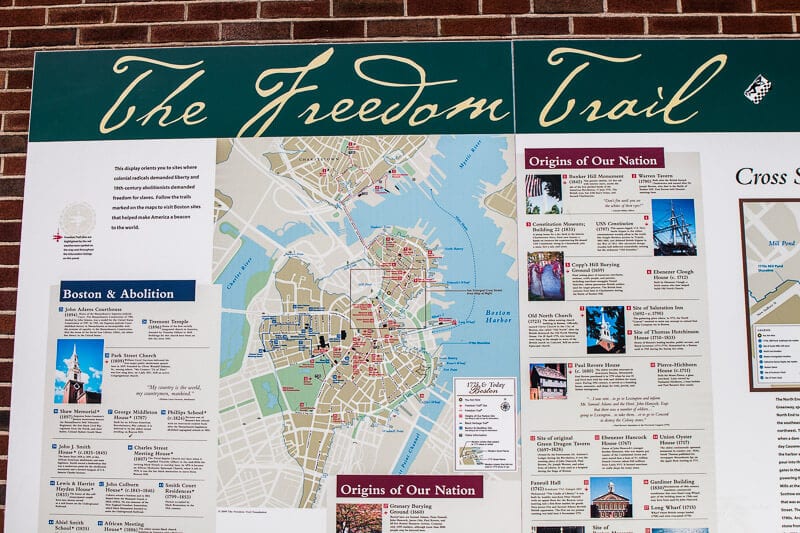 It comprises a unique collection of museums, churches, meeting houses, burying grounds, parks, a ship, and historic markers that tell the story of the American Revolution and beyond.

It was in Boston that the American Revolution began and is what makes this city so fascinating and unique.

Experiencing the Boston Freedom Trail Foundations Tour is one of the must not miss things to do in Boston.

You can walk and follow the Freedom Trail on your own, or you can take a Freedom Trail tour led by 18th-century costumed Freedom Trail Players for insider tales of high treason, mob agitations, revolutionary actions, and partisan fights of the American Revolution.

Each guide is a legendary figure at the forefront of the American Revolution. Isiah Thomas was the publisher of the Massachusetts’s Spy.

The Walk Into History Tour is a 90-minute tour featuring 11 of the 16 Freedom Trail sites.

The Reverse Walk Into History Tour is the same tour, beginning and ending in the reverse locations.

The North End tour is a 90-minute tour featuring 3 of the 16 Freedom Trail sites, as well as the North End neighborhood (one of our favorite areas in Boston). 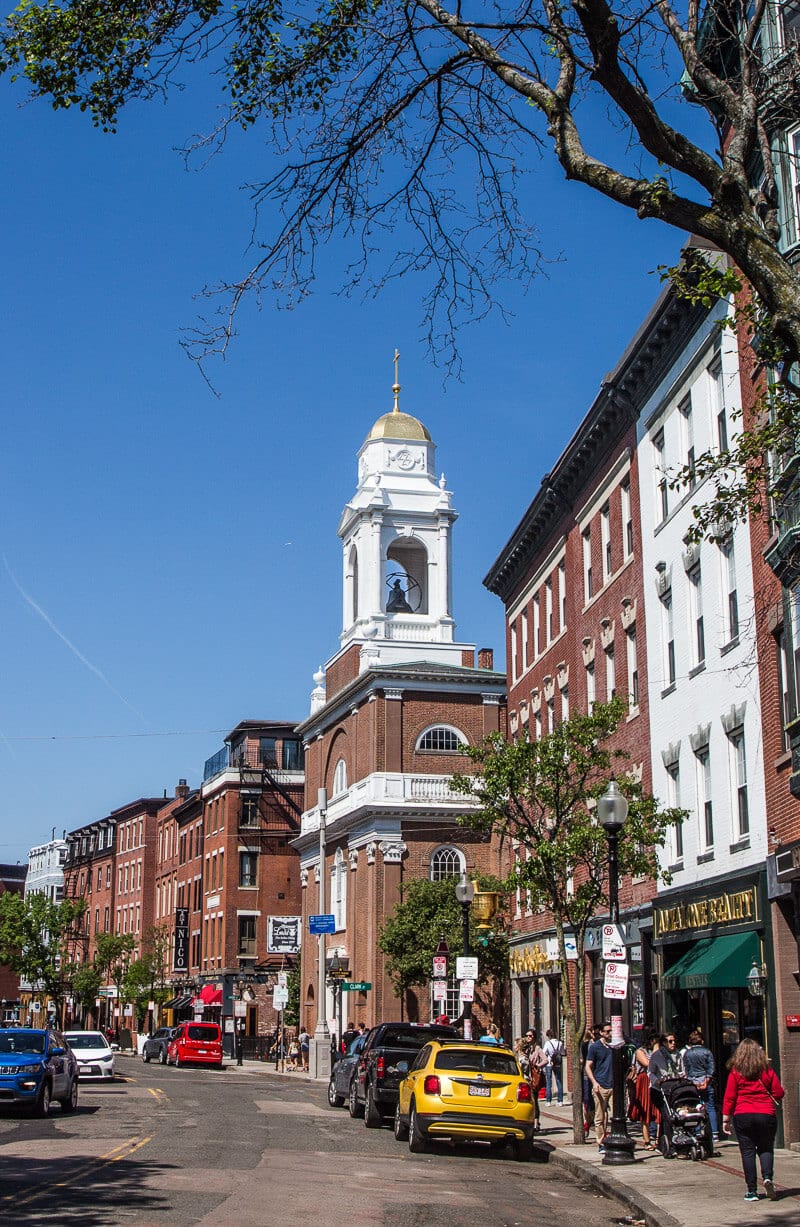 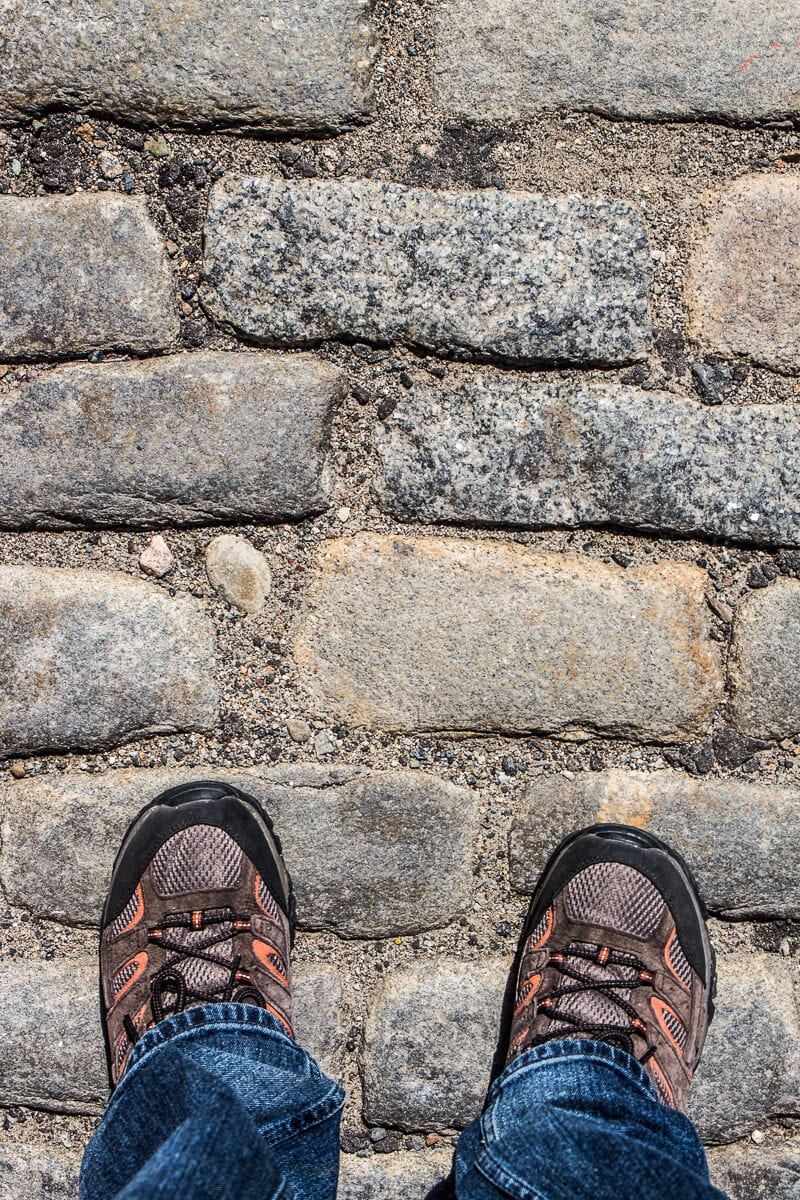 Cobblestone street in the North End 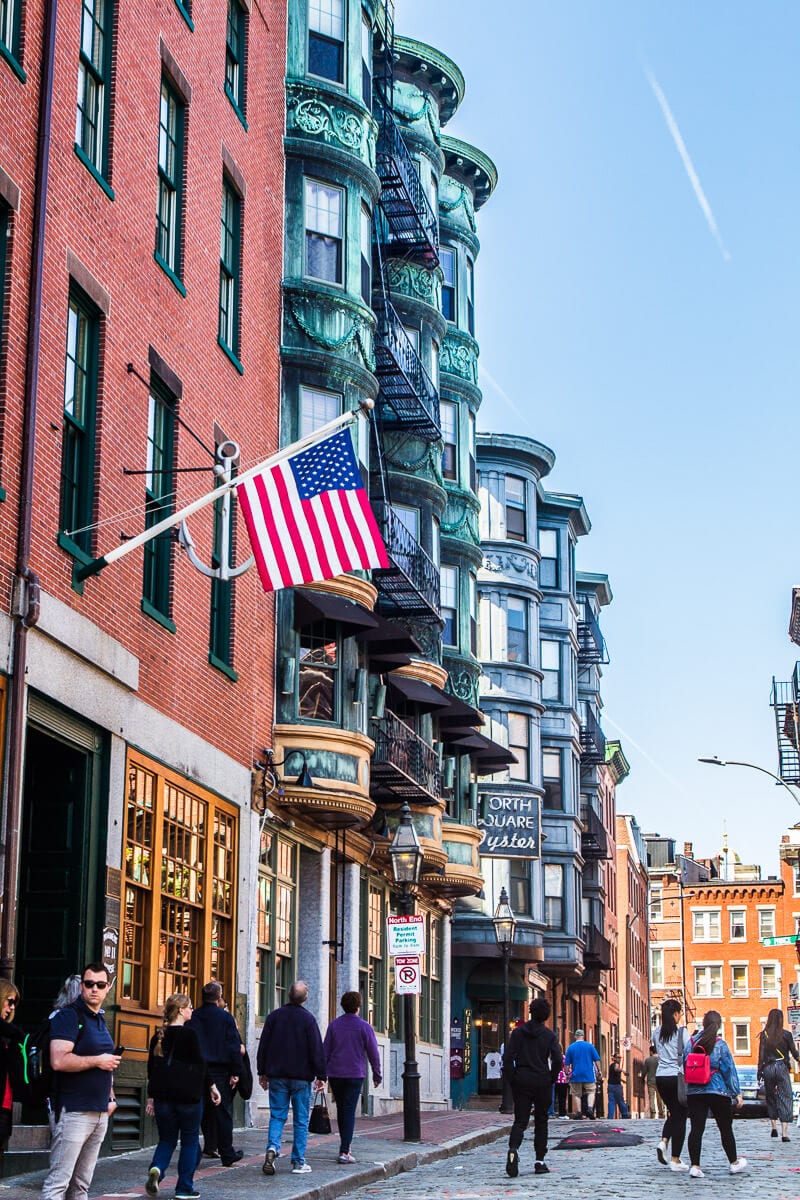 Some of the historical sites in Boston that we passed and heard stories about on our walking tour were the State Capitol Building in the distance sitting up on Beacon Hill, the Old State House and the site of the Boston Massacre and where the Declaration of Independence was read from the balcony in 1776. 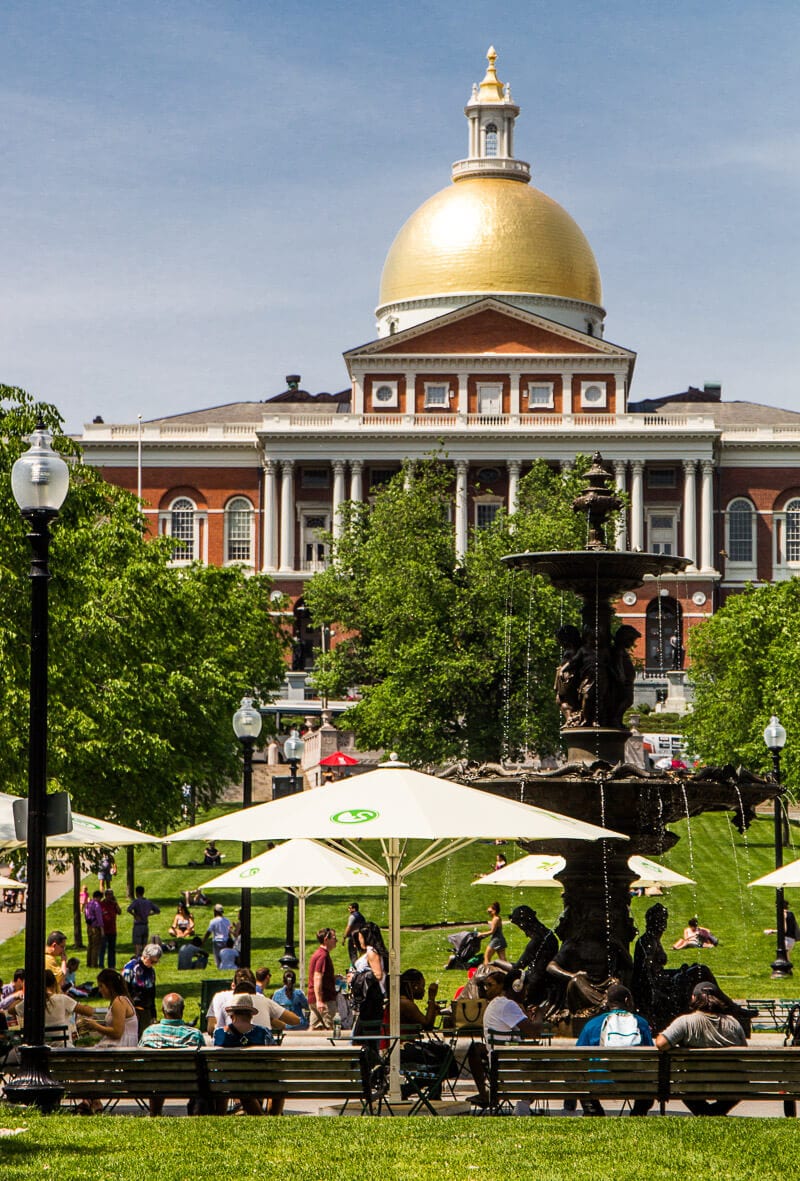 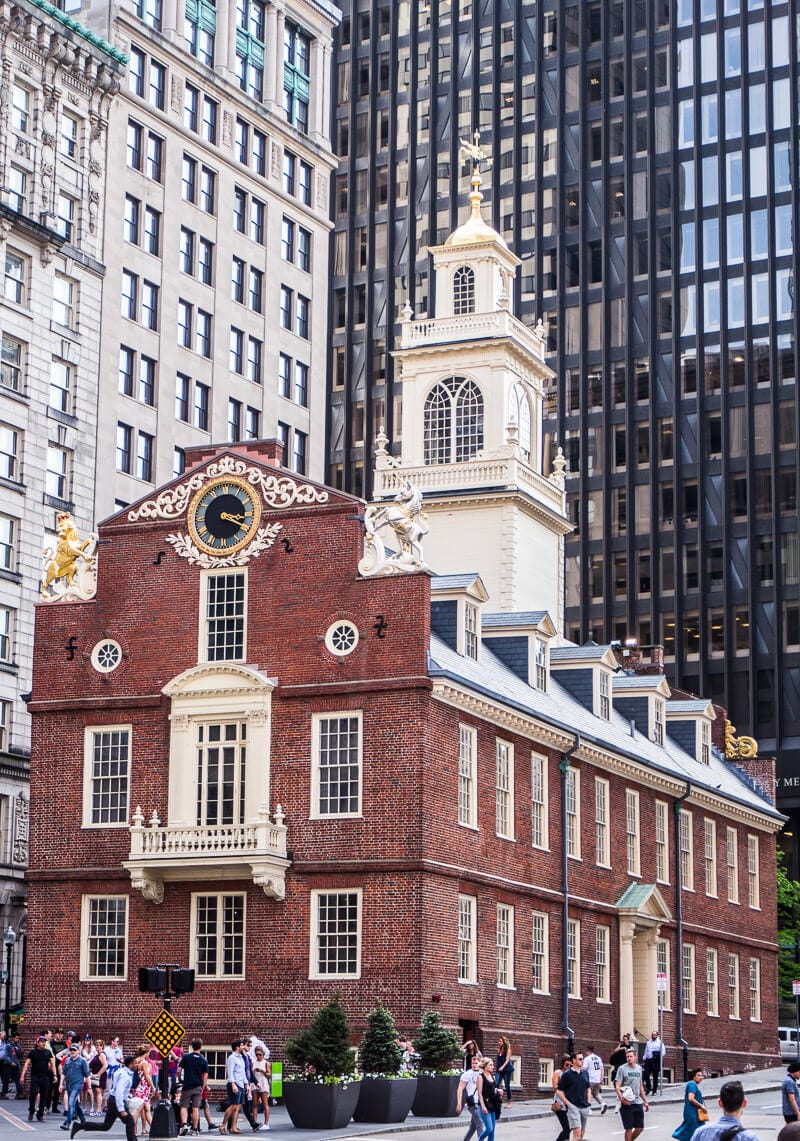 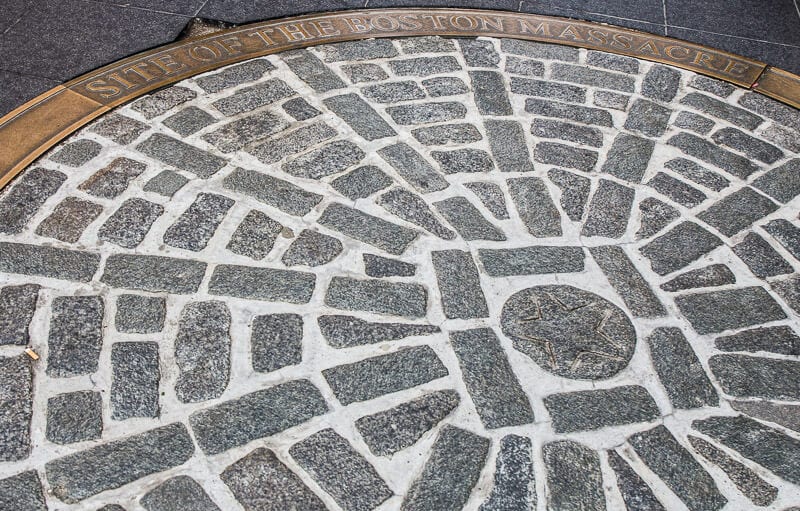 We also spent time in the Granary Burying Ground, where we saw several important Revolutionary heroes buried, including John Hancock and Sam Adams. 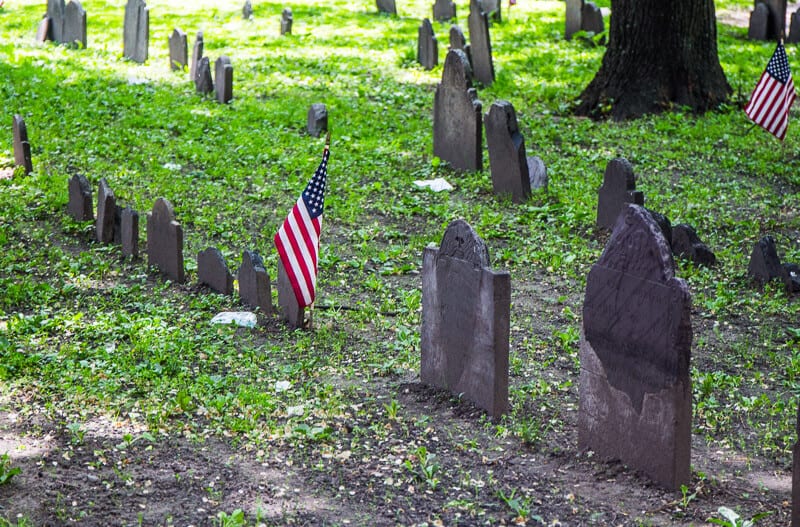 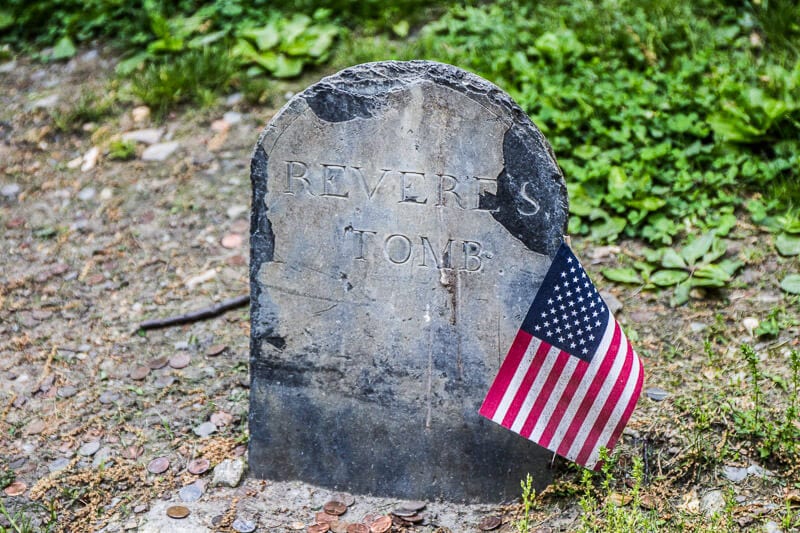 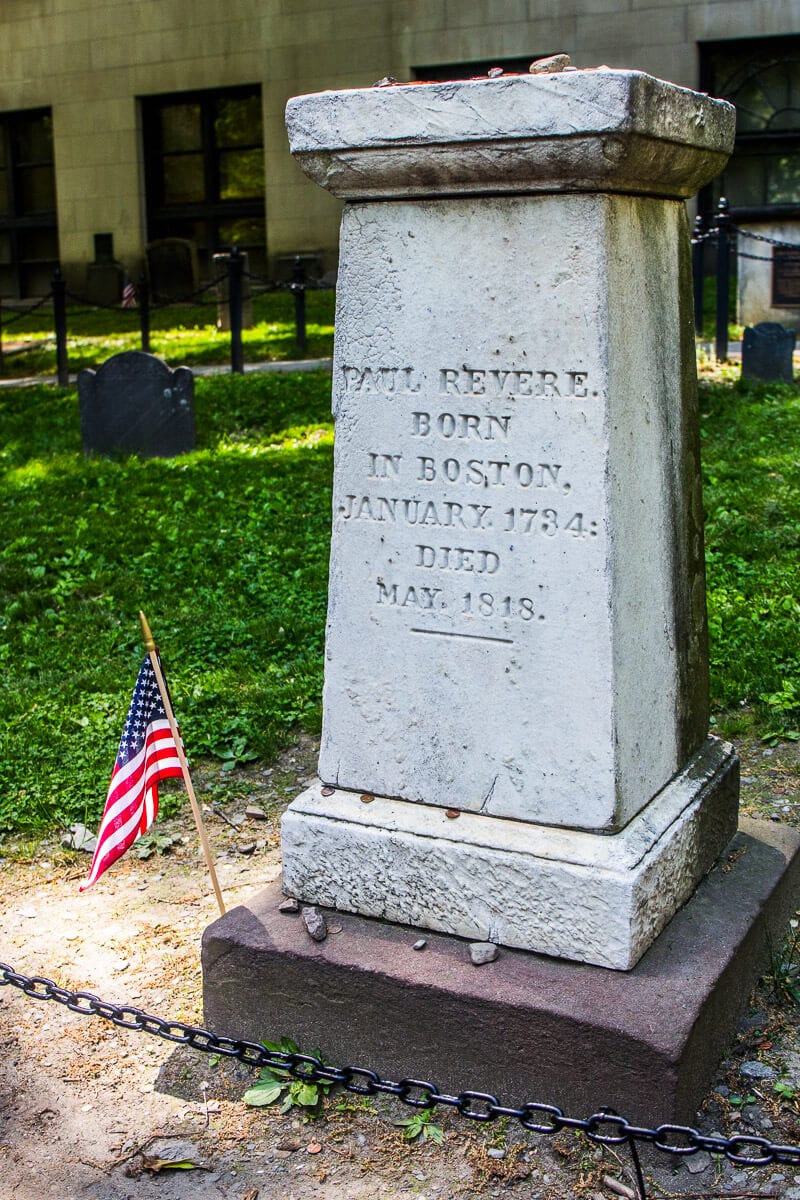 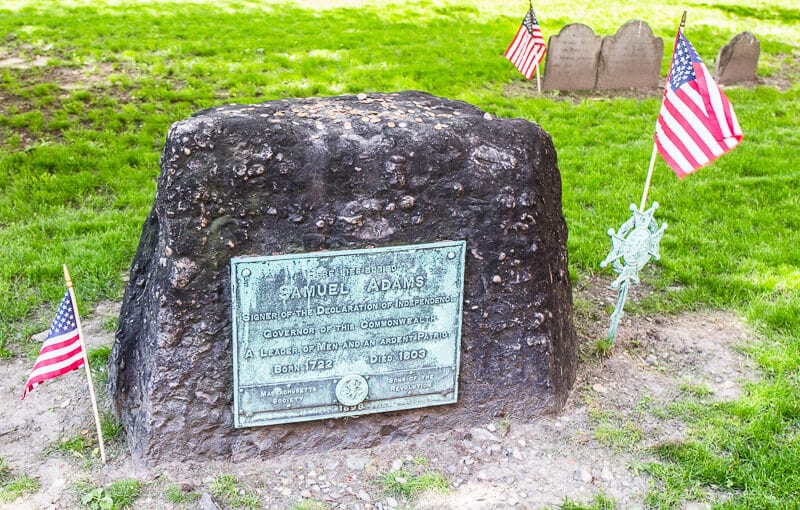 We attempted to go back and do that after the tour but it was too busy.

Allow at least three hours to take a leisurely pace and enjoy all the historical markers.

It was quite a hot day when we did the Boston Freedom Trail tour and we had spent the morning on the Duck Tour and doing a fair bit of walking.

I was concerned the girls would have a meltdown.

But, we found shady spots along the way, and our 10 year old Kalyra said she really enjoyed the tour. She was attentive and curious. 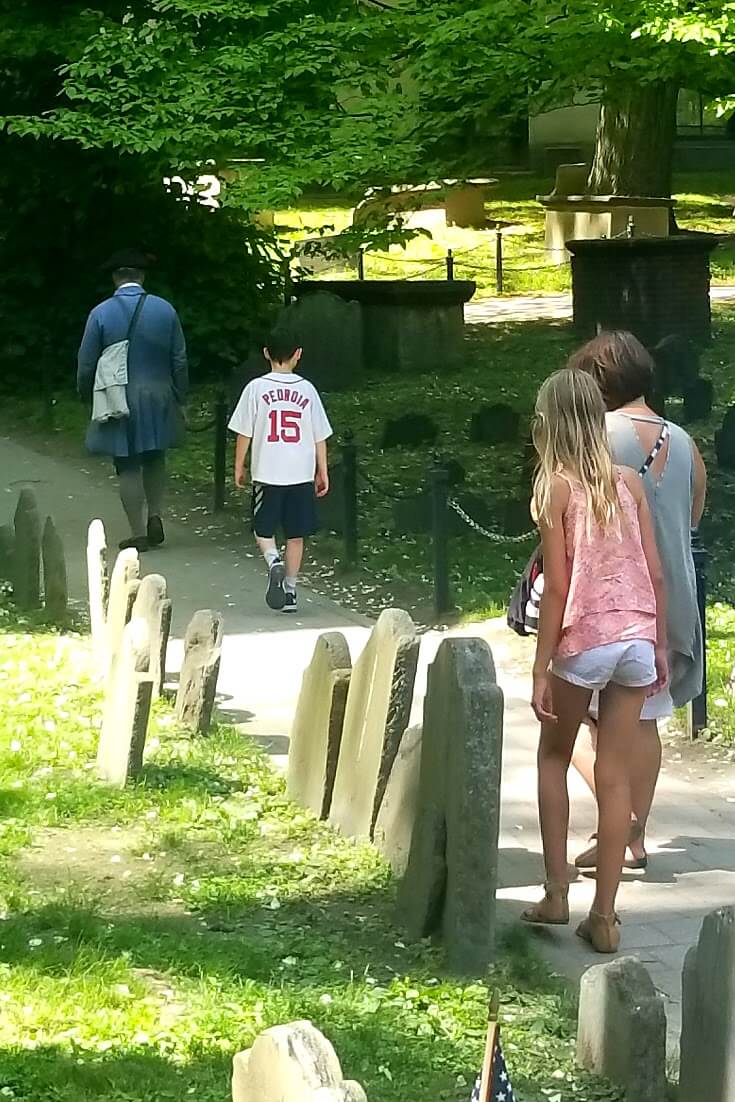 The full tour may be a bit long for younger kids, but if they love history, it’s a fantastic Boston attraction to do with kids.

It’s so informative and funny and will sure beat learning about it in those way too thick and boring history books.

The guides are dressed up and take on the persona of a character from the Independence period which is engaging for them. 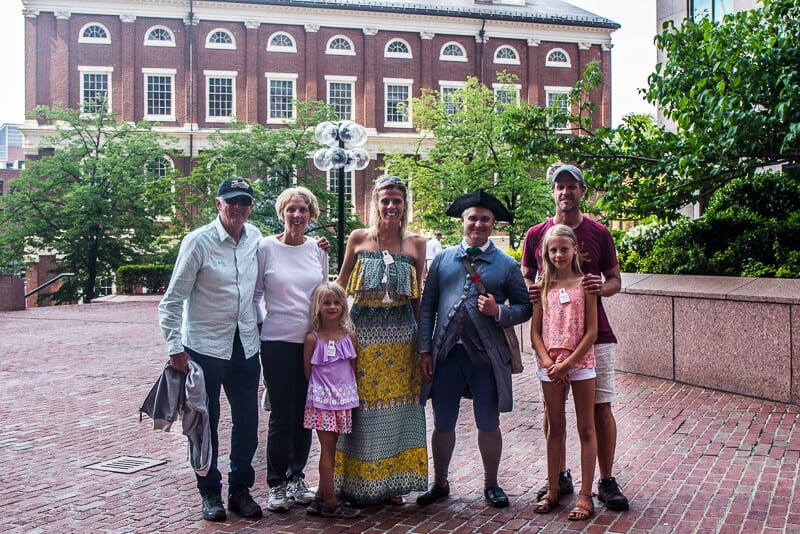 With our guide Isiah Thomas (played by Rob Crean)

These are the types of things we love to do to help road school our kids.

We let interactive real life experiences teach them. It means we have more time to pursue passions and talents and to spend together creating memorable moments.

You can read more about how we road school here.

Where to Stay in Boston 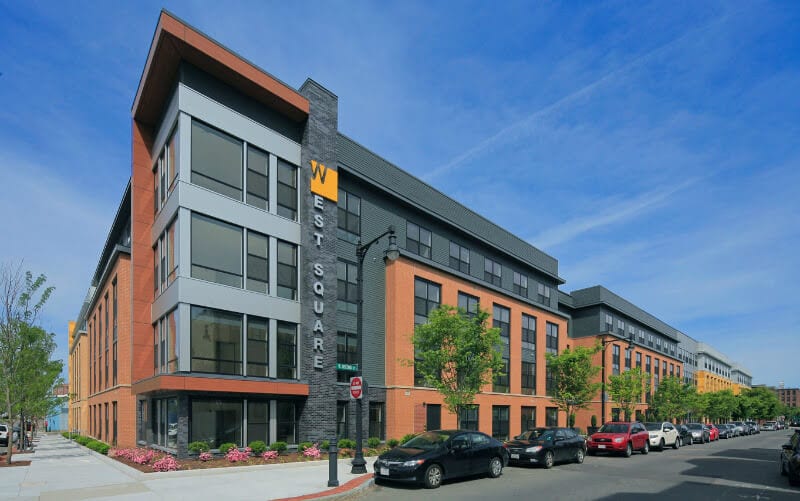 We rented an apartment located in the South End area through Booking.com.

Our two bed apartment slept the six of us, with two large bedrooms and a sofa bed for the kids.

It was easy for us to get around different parts of Boston and was a 40 minute walk into the city.

Read reviews and book your stay through our partner, Booking.com

For more places to stay in Boston, click here.

Viator is a Trip Advisor company and offers small group tours of Boston to the most popular places and attractions. 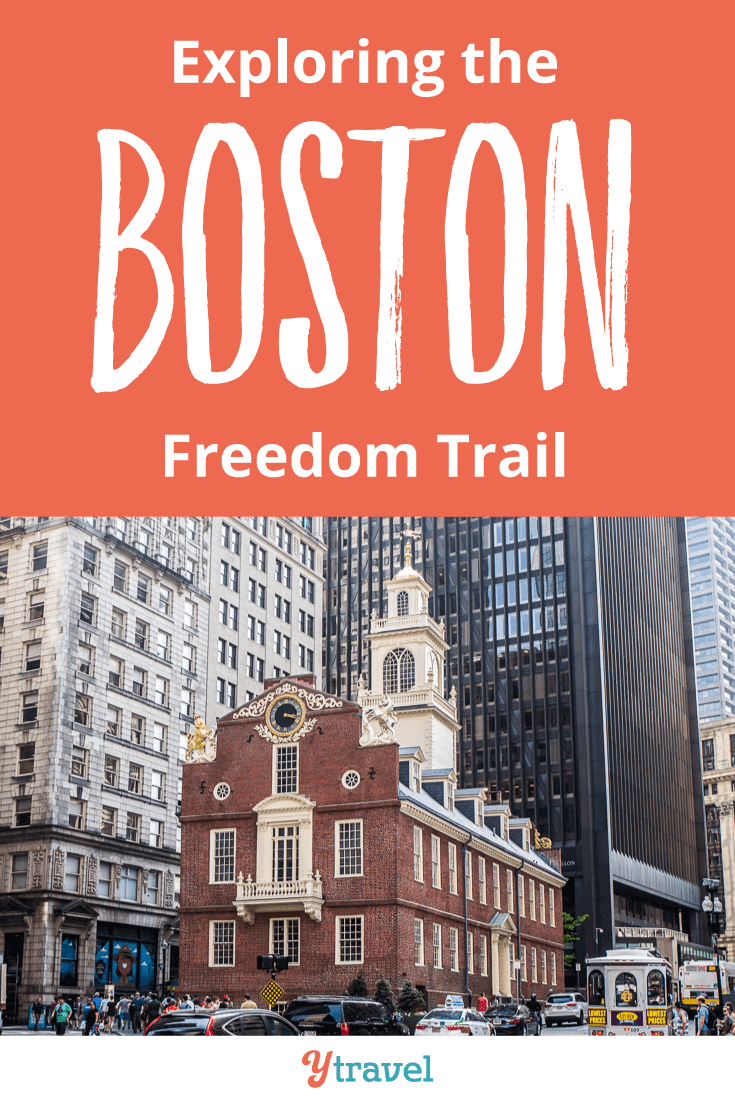 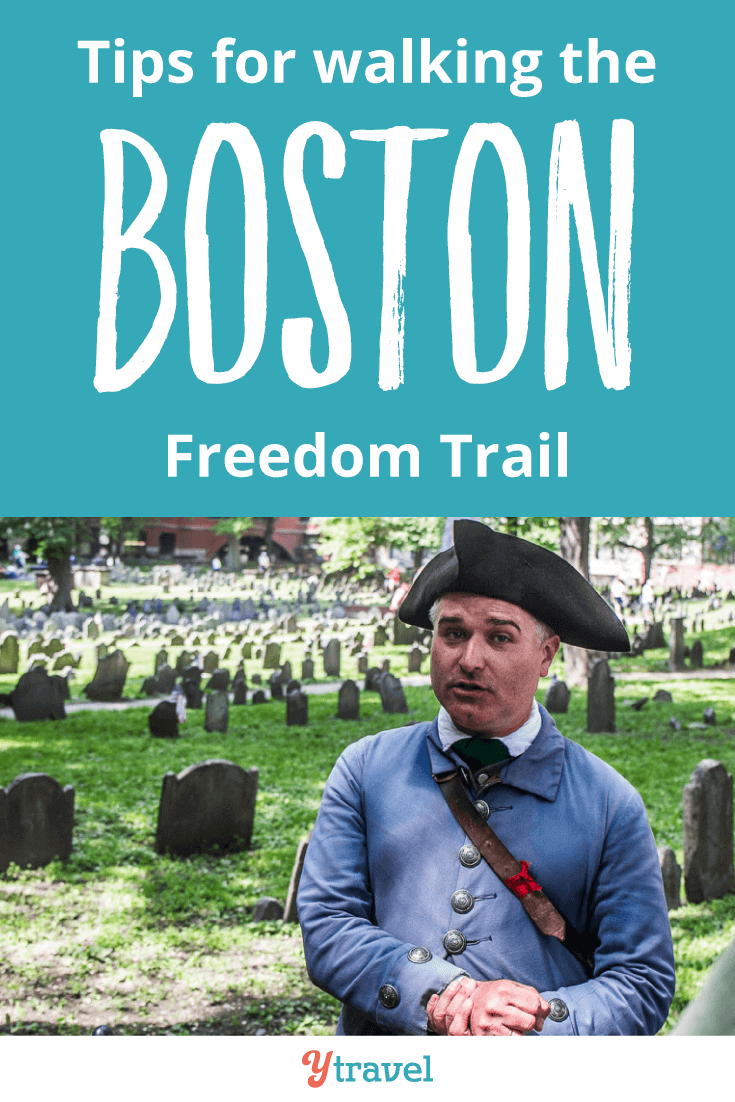 Walking the Historic and Hilarious Boston Freedom Trail Tour
Don’t forget to sign up for our weekly update and free audio; Connect with us on instagram;

Stop Telling Grieving Parents How They Should Grieve