Democrats Shouldn’t Get Greedy on Impeachment 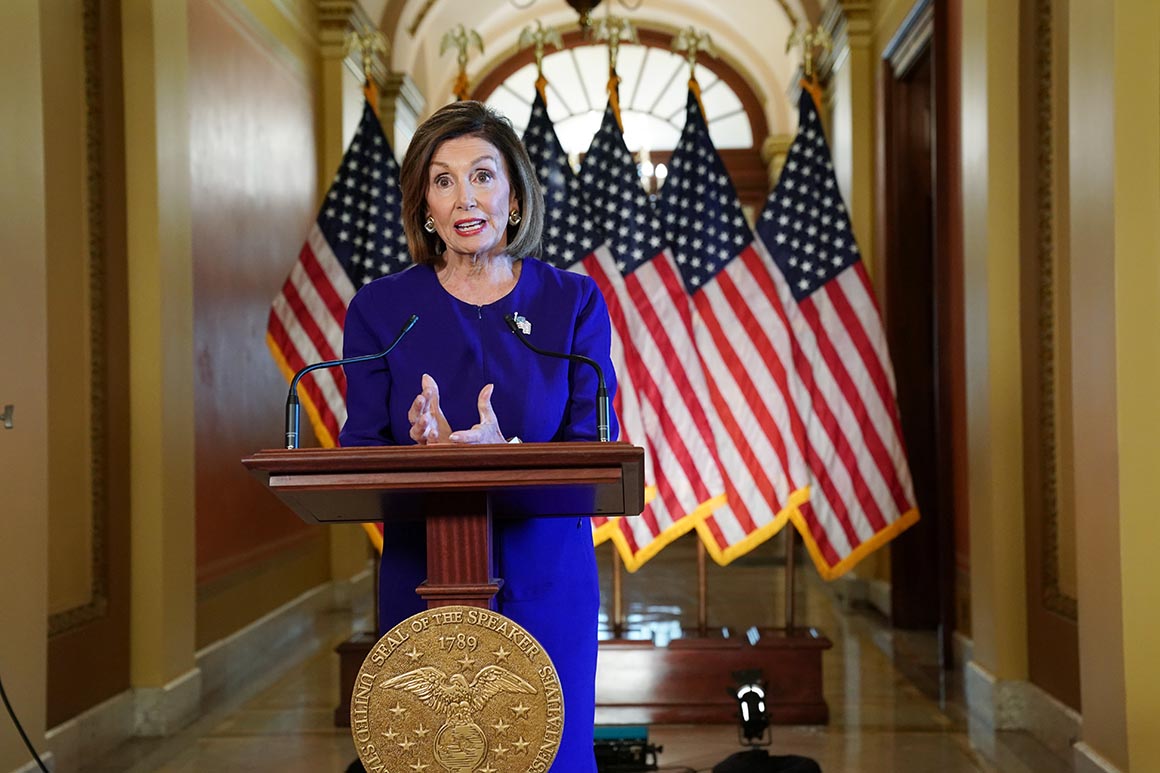 The power of the Ukraine revelations lies in their simplicity.

Unlike the 448-page Mueller report, a dense legal document peppered with thousands of footnotes, both of the documents that have propelled the Democratic impeachment inquiry and a dramatic shift in public opinion can be easily absorbed in minutes.

The five-page summary of President Trump’s call with Ukraine President Volodymyr Zelensky, in which he asked Zelensky to investigate Joe Biden and his son, and a seven-page whistleblower complaint that asserts the call is part of a pattern of behavior present a straightforward story—Trump abused his power to pressure another nation to dig up dirt on a likely political opponent and then his staff tried to cover it up.

House Democrats are divided regarding whether to focus on these allegations or expand their impeachment inquiry to other topics, but Speaker Nancy Pelosi has signaled Democrats want to stay focused as they press forward with an impeachment inquiry. That is the right strategy, but preserving the simplicity of their message will require real discipline, especially when there is pent up appetite among many Democrats—both in Congress and in the general public—to hold Trump accountable for all sorts of alleged wrongdoing he has committed as president.

Although the impeachment process is formally an investigation, the process also educates the public, and mustering public support will be absolutely crucial for moving forward. In my experience as a former federal prosecutor and as a trial lawyer in private practice, a key to winning any trial is to tell the simple story and force the other side to tell a more complicated one. The goal is to appeal to the part of the brain that does not require active analysis to understand the point. To appeal to jurors (or in this case, the public) in their “gut.”

I can understand why many lawmakers want to add obstruction of the Mueller investigation to the inquiry, because there is overwhelming evidence that Trump obstructed that investigation. That seems simple to many people. But it’s impossible to explain how Trump obstructed justice without first discussing the underlying Mueller investigation. And proving those allegations would require the testimony of Trump allies like Corey Lewandowski, who defiantly thumbed his nose at House Democrats during his recent testimony.

Ukraine is different because Trump has already done so much work for the investigators. Trump gave Democrats a great gift by releasing the transcript and whistleblower complaint, and the transcript alone proves much of their case. But to investigate the broader allegations made by the whistleblower, the Democrats will have to call witnesses and subpoena documents. Democrats should limit their inquiry to witnesses that are essential to providing first-hand accounts of the scheme outlined in the whistleblower complaint, such as the officials who sat in on Trump’s call with Ukraine, State Department officials tasked with aiding Rudy Giuliani’s outreach to Ukraine, and officials with knowledge of the “lock down” of records of the call.

Trump will try to stonewall even this limited investigation even though he has little ability to block former officials, like his former Ukraine envoy who recently resigned, from testifying. As a practical matter, Trump can pressure them to stay silent or slant their testimony in his favor, and his public efforts to unmask the whistleblower, whom he has accused of acting like a spy, are the just the beginning.

But Trump’s efforts, and those of his allies, to stonewall the inquiry on the grounds that the whistleblower’s complaint is based on hearsay, or that he is politically motivated, will not surmount the evidence that is already in the public sphere. The notion that the complaint is hearsay is undercut by the summary released by the White House itself that corroborates the complaint, which is not hearsay under the rules of evidence. And if there is no major disagreement on the details, only their propriety, then why not get to the bottom of what happened?

The only way to do that is to stay focused on the Ukraine episode. A wide-ranging inquiry into obstruction of justice (or other concerns, such as emoluments or separation of families at the border, all of which is troubling) would play into Trump’s attack that the Democrats are assembling everything they have to take him down and were ready to do so before the Ukraine scandal broke.

The news Monday afternoon that Trump asked the Australian prime minister for help with the Justice Department’s review of the origins of the Russia investigation, and that Attorney General Bill Barr traveled overseas to ask foreign leaders for similar aid, will undoubtedly lead to discussion of widening the impeachment inquiry. That would be unwise, because those episodes are problematic for different reasons than the Ukraine episode, which cannot be defended on its face. Keeping the story simple is the right approach.

Real-life prosecutors often reach a different calculus, engaging in wide-ranging investigations and bringing indictments containing many different charges. It’s the proverbial kitchen sink technique where an overwhelmed defendant knows a jury is likely to convict him on at least some counts and is persuaded to plead guilty to avoid the lengthy prison sentence that would come with a conviction on all counts. That won’t happen here.

Given that Trump has already admitted much of the alleged conduct (while insisting that it was absolutely proper), the focus of the impeachment inquiry will be on whether the activity is worthy of impeachment. Already many Trump allies argue that the conduct is not impeachable, although few have affirmatively defended the conduct as appropriate.

The impeachment case put together by House Democrats should aim to explain to their Republican colleagues, and the general public, why this conduct merits removal from office. Unlike real-life prosecutors, who don’t need to try their case until after an investigation is completed, the House will be putting on their case while they investigate.

Instead of trying to reference criminal statutes, which don’t perfectly fit Trump’s conduct, the question House Democrats should aim to answer is whether Trump’s actions are a type of abuse of power that our nation’s founders intended to address via impeachment. While it is self-evident that Trump’s scheme is highly problematic, Democrats’ impeachment inquiry will fail unless they can convince the public that it warrants removal from office.

Moving forward, Democrats need to make that case to the American people without letting distractions or roadblocks created by Trump and his team distract them or pull them off course. That is the challenge ahead for Democrats, given that Trump has already gifted them the evidence they need to prove most of the necessary underlying facts to convict him.

What’s a Domain Name and Why Does it Matter?