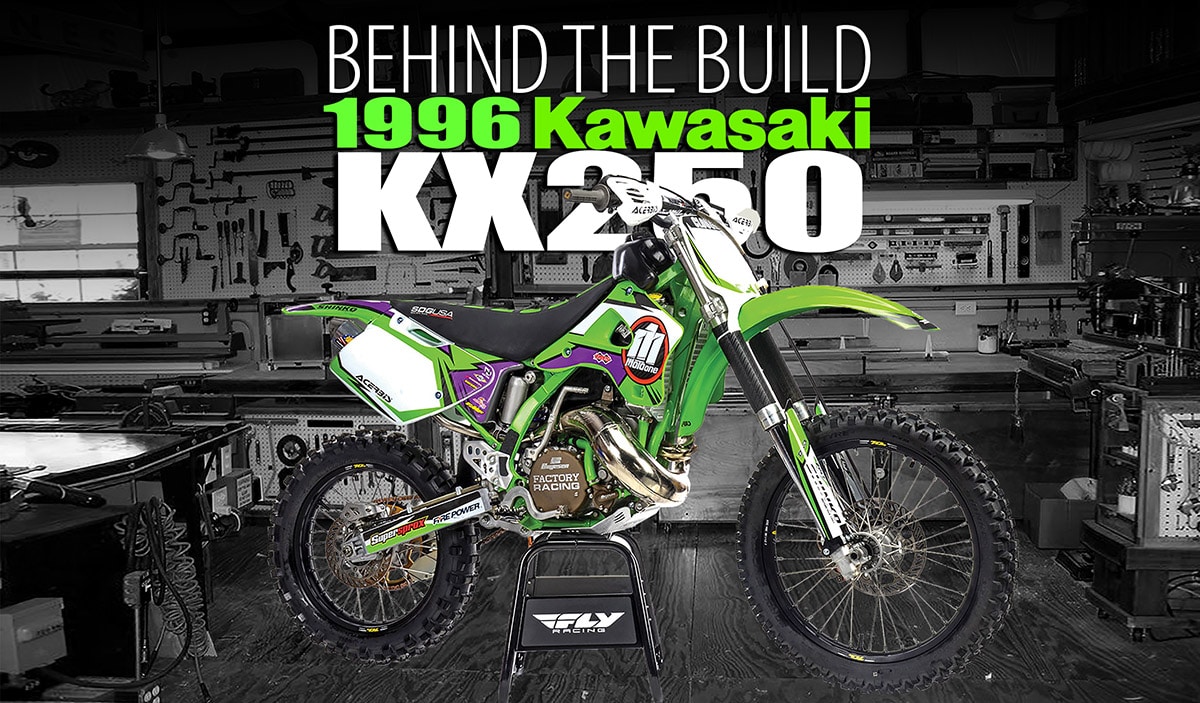 We will be the first to admit that sometimes we get carried away with our two-stroke rebuilds. It’s so easy to do. With this 1996 Kawasaki KX250, our main goal was to find an off-road bike that the average person could afford to not only build, but then ride on a regular basis. We teamed up with Moto One and Western Powersports in Boise, Idaho, to see if it was possible. 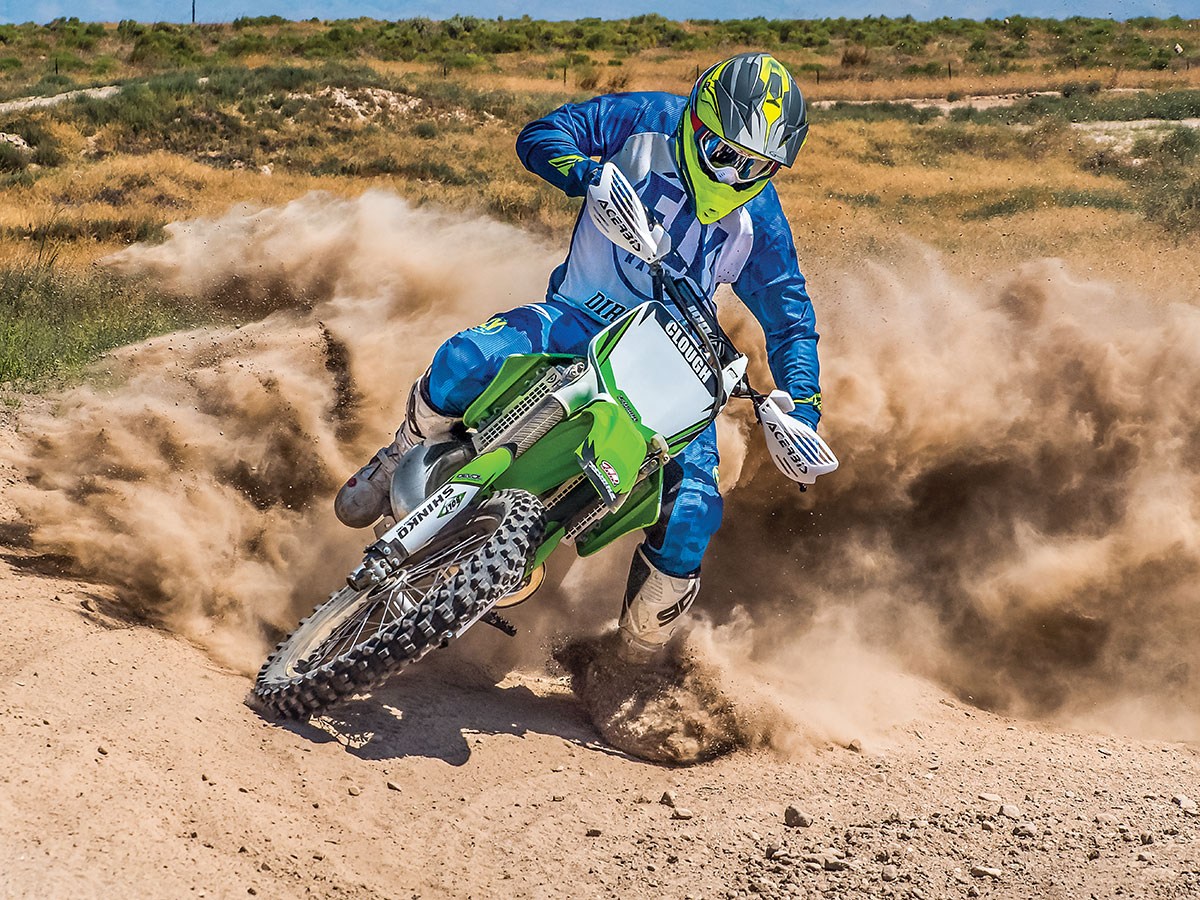 We didn’t want to go overboard, but we also didn’t want to cut any necessary corners, either. The crew at  Moto One did most of the wrench turning on this project, with some assistance from Pete Treadwell and the Western Powersports crew. The engine was in working order but in dire need of a rebuild, so it was completely disassembled. Surprisingly, on inspection, there were none of the major issues we usually come across, like broken gears putting holes in the lower cases or connecting rods sticking out of the cylinder. For a 24-year-old bike, it actually looks pretty good. 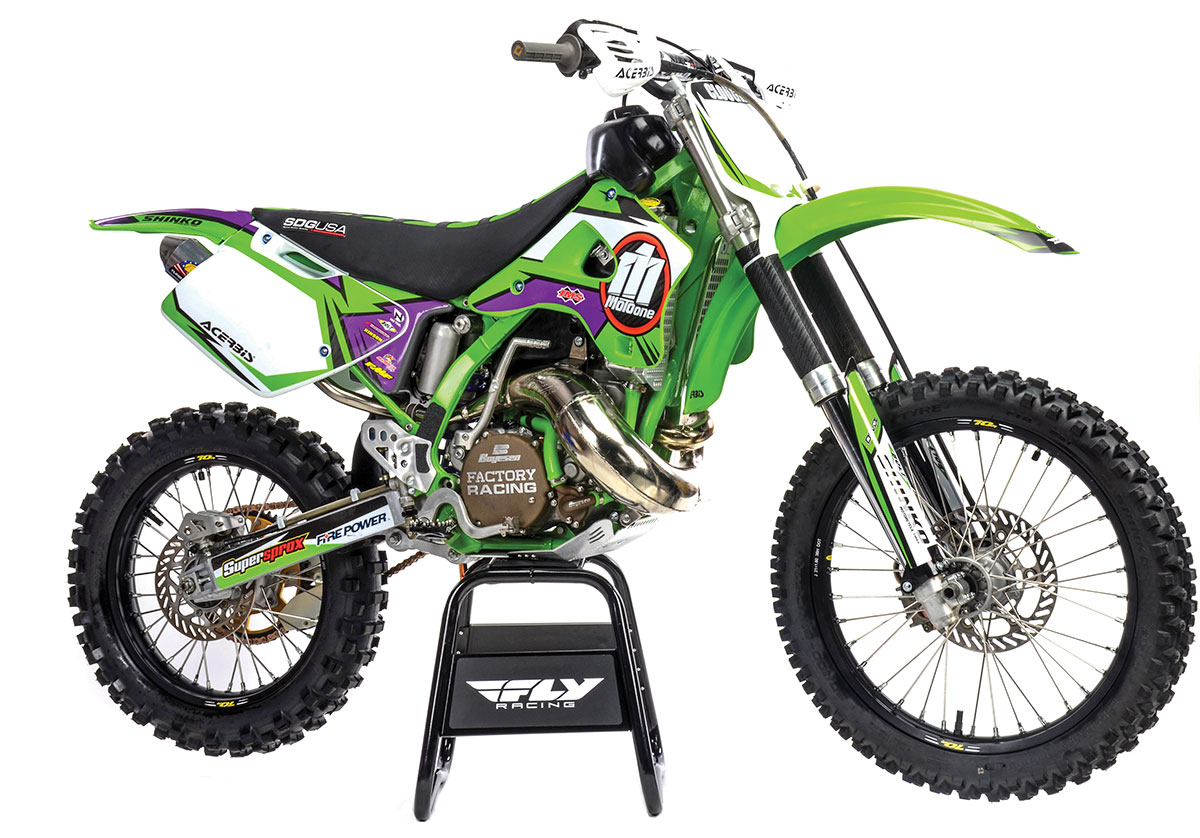 Boyesen and FMF dressed up the outside of our 24-year-old machine and gave it some extra spunk in the performance column.

Yes, all the bearings were worn out and the clutch had a sizable amount of play in it, but overall it had a great foundation to build on. About the only surprise we came across was that the top end at one time had been bored out, so the replacement piston would need to match the new, slightly larger cylinder diameter.

The remaining parts of the engine were rebuilt using a kit from Wrench Rabbit that consists of a complete crank assembly, top-end gasket set, bottom-end gasket and all the O-rings needed. We added a Boyesen Rad Valve intake system for a little extra performance, along with a Boyesen ignition and clutch covers for a little bling factor. The water-pump housing had a small crack in it, so that was also replaced with a Boyesen Supercooler that matched the outer case covers and is designed to keep the engine running cooler. Other items included in the engine department were a Hinson clutch, a set of oversized GPI radiators and green silicone radiator hoses. 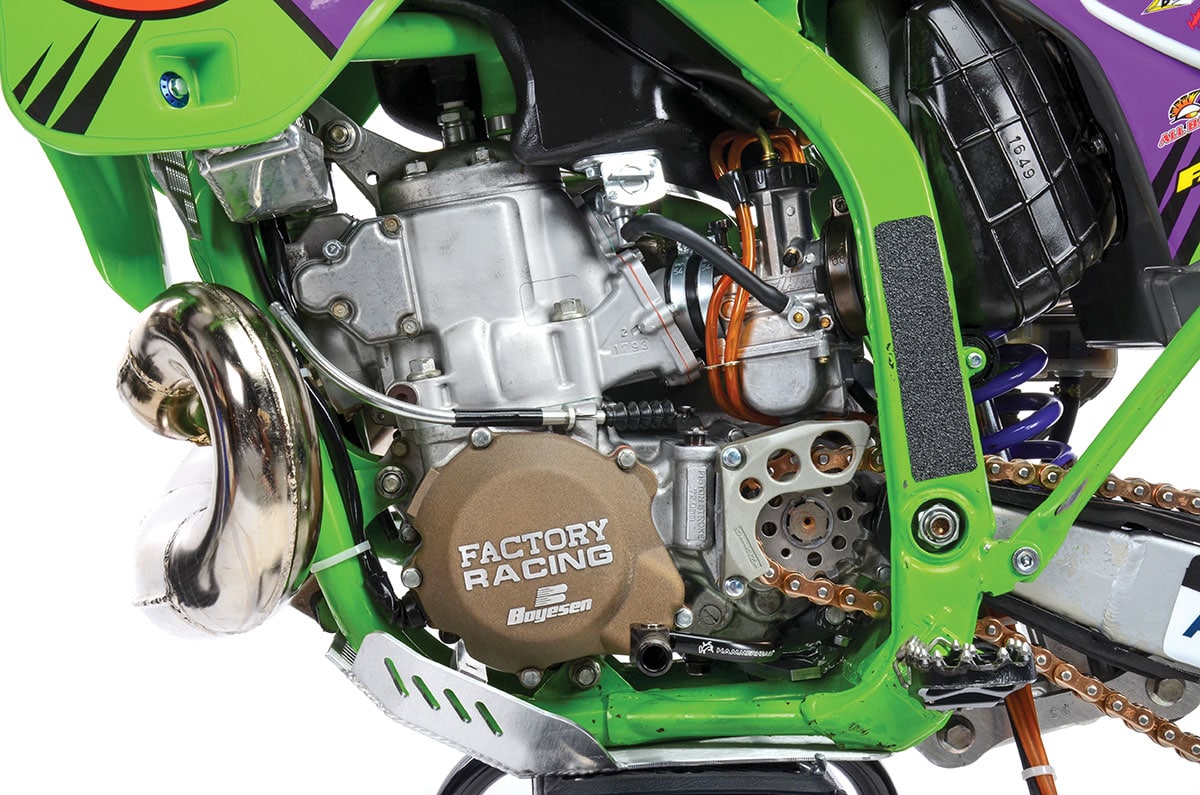 A Wrench Rabbit kit and Hinson clutch got our KX250 handled internally.

With the engine ready for prime time, the focus shifted to getting the chassis up to par. Just like the engine, the frame was stripped and all the bearings were inspected. Most of them would have probably been okay with a deep cleaning and some grease, but since everything was apart, the decision was made to replace them all using kits from All Balls Racing. The kits are reasonably priced and usually come complete with all the seals, bearings and spacers needed to replace all the OEM units. The head-stay bearing kit also includes new races, just in case the existing ones are bad and ensure everything works seamlessly. The frame was cleaned up and given the old rattle-can treatment, meaning it was spray-painted. 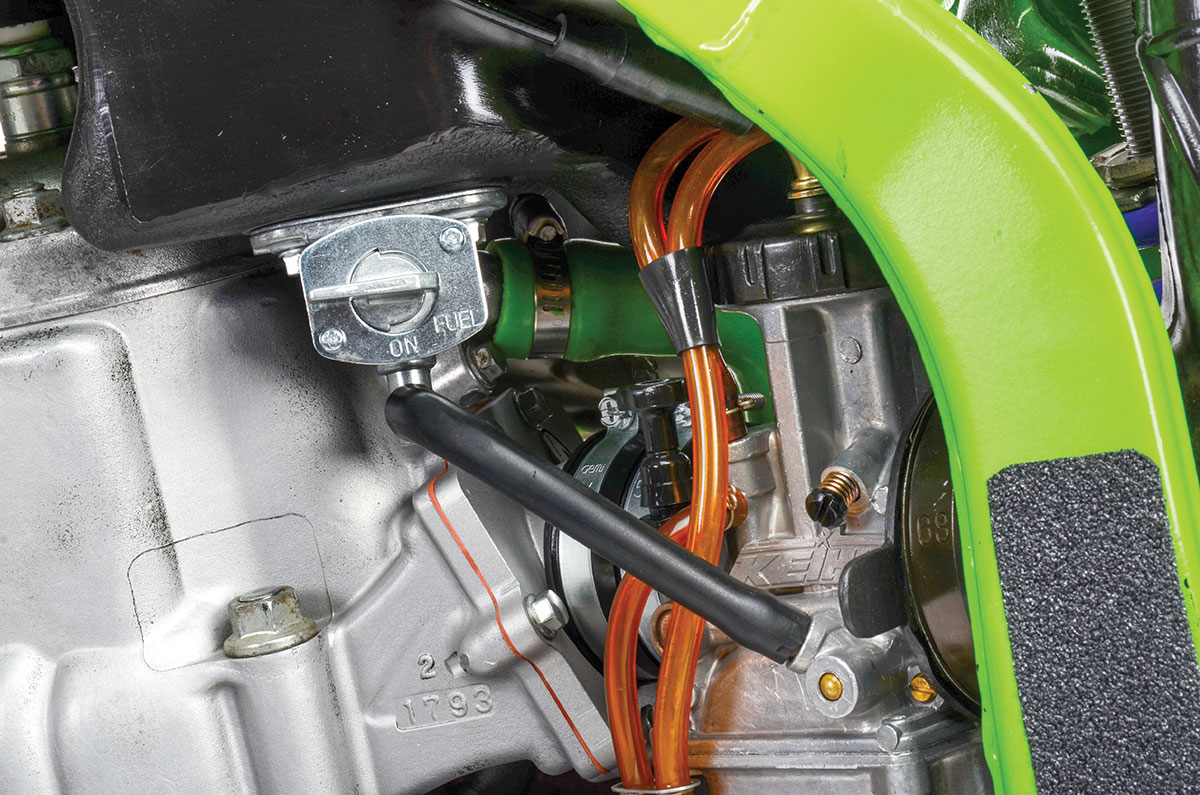 Fuel Star is another company making OEM replacement parts that are necessities for any rebuild project.

We have learned with all these older bike builds that replacing the chain adjusters in the swingarm is a must. These things are usually stripped out, but luckily companies like Bolt Motorcycle Hardware make replacement kits that bolt right in. A new plastics kit and handguards from Acerbis replaced the dilapidated units on the bike, topped off with a new set of graphics and new mounting hardware from Bolt Motorcycle Hardware. We knew that this bike was going to be used for off-road riding, so we wanted some more fuel capacity. After looking at a universal-style gas solution, we called IMS Products, who makes oversized tanks for just about every current machine on the market. Not only did IMS have an oversized gas tank available for our ’96 KX250, but they produced it, and we had it on the bike less than two weeks later. 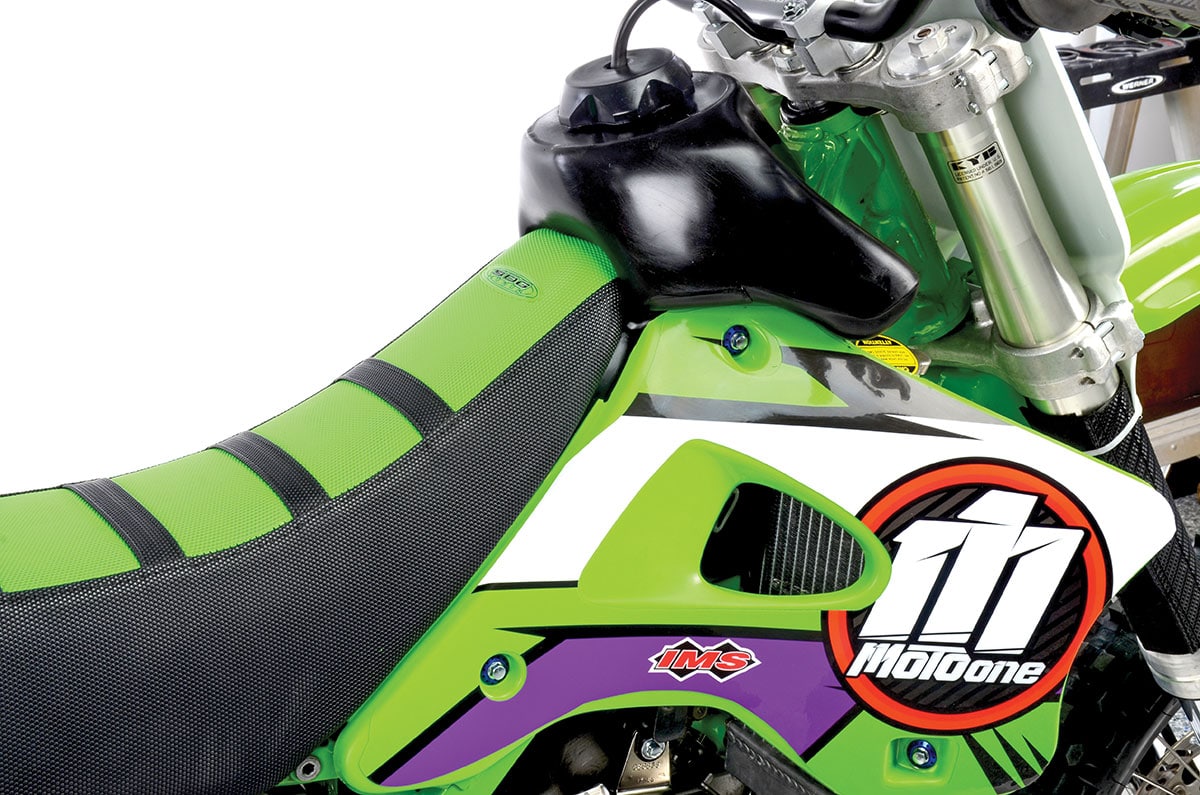 We were blown away that IMS not only made a tank that fit our 1996 KX250, but produced it and handed it over to us very quickly.

The wheels were rebuilt using Pro-Wheel rims, and, of course, we went with an 18-inch rear and then wrapped both ends in Shinko tires. Up front we went with a 90/100/21 Fat tire and a 525 Cheater tire in the rear. We topped off the build using some aftermarket bolt-on items, from Supersprox, Devol Racing, ODI handlebars, Fuel-Star and Flo Motorsports.

We love doing these older two-stroke builds; sometimes they go easy and everything comes together effortlessly, but most of the time they produce lots of headaches. The Moto One crew made this one easy for us doing all the major wrenching. We like that! This machine might not have that factory trick look that everyone has become accustomed to on older bike builds, but it out-performs most of those builds hands down. 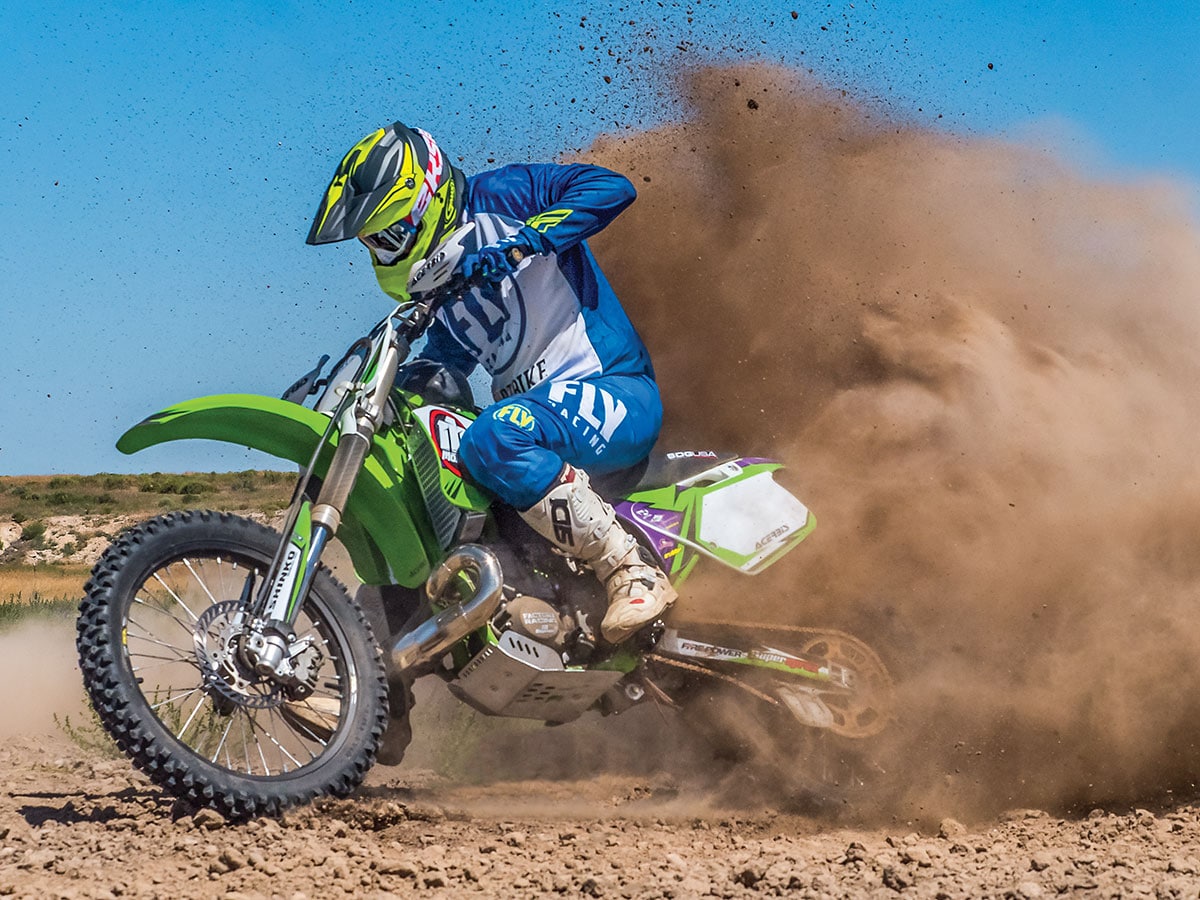 The reaction on people’s faces when they see this bike in action is priceless.

This thing is a blast on the trails and has no problems hanging with brand-new two- or four-stroke machines. It’s pretty funny to see people’s reactions when you show up to a group ride on a bike that might be older than some people on the ride. It’s even more entertaining to see those same people’s reactions at the end of the day when they have been trying to keep up with you on their brand-new $10,000+ machines. If you are a regular on the trails around Boise, you have or probably will see this KX250 ripping around during the spring and summer months.